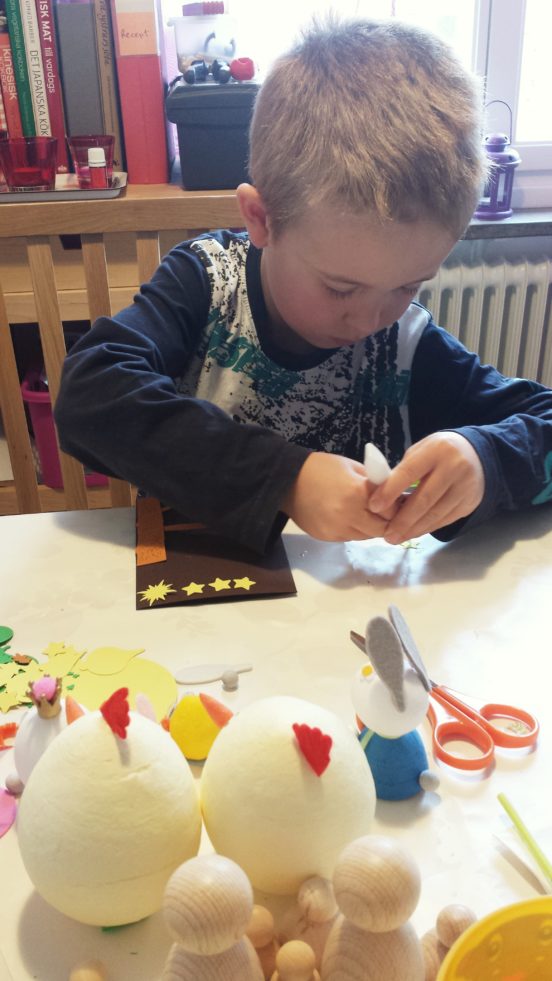 So yesterday we went to our aunt to celebrate Easter with the family and to celebrate her youngest daughter who turns 14 on Tuesday.
My two youngest cousins were there too and I made them Easter bags with some chocolate and soft bubble bottles, I’m trying not to give them too much candy as their parents try to keep them away from sugar. I gave them handmade bags last year too with a small treasure hunting quest for the older boy. This year I made a trail with chocolate eggs for them to follow. They were super happy!

The bags are something I got from some kits and they’ve been lying around for a while now.. happy to get to use them and some other stuff in my stash!
I found some fun challenges to enter with these bags too!

The Ladybug crafts challenge: Anything goes
Alota rubber stamps #103: Springtime
Crafty creations #215: Easter
Magnolialicious challenge: All about spring
I love promarkers: Spring is in the air 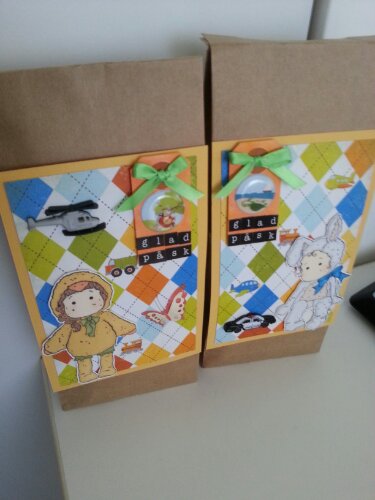 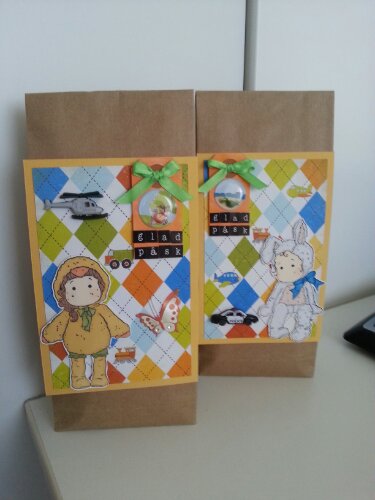 A few of the items from my stash: the shaped buttons (helicopter and police car), bubble stickers and a butterfly sticker I found in Berlin at Karstadt I believe.
The buttons were a part of the Christmas calendar I got from my mother last Christmas, they have this ring on the backside which I cut off and that caused the button to fall apart! Glued it all together again and adhered it with some glue dots. 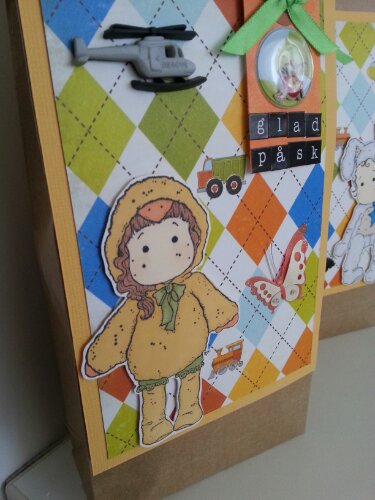 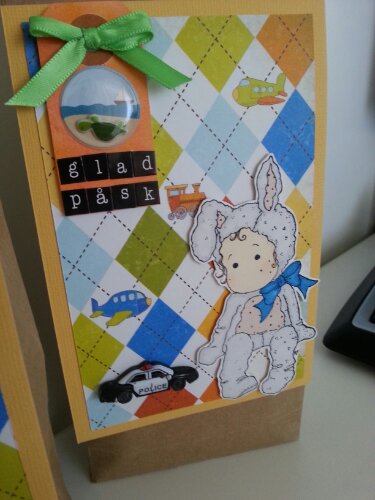 A closeup on the bunny, colored with pro- and flexmarkers. I colored the bow with a darker blue first and added a brighter shade on top, gives a nice touch! 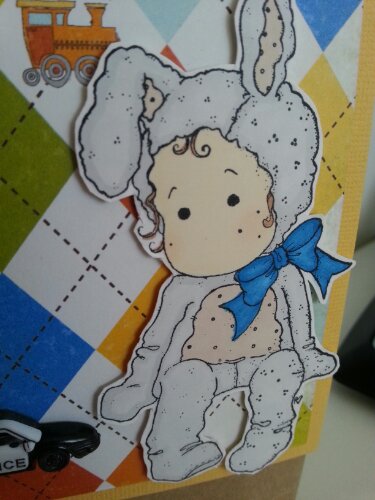 And here is the birthday card for my other cousin who turns 14. Inspired by the Sweet stop sketch #204
So happy I got to use both some alphabet stickers and a few brads from my stash. 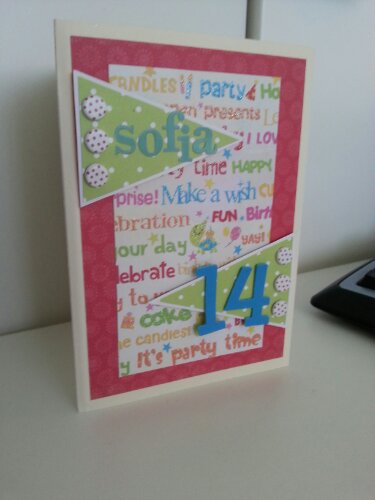 Least but not last I also finished off some cards to go with a few angels my other aunt ordered. 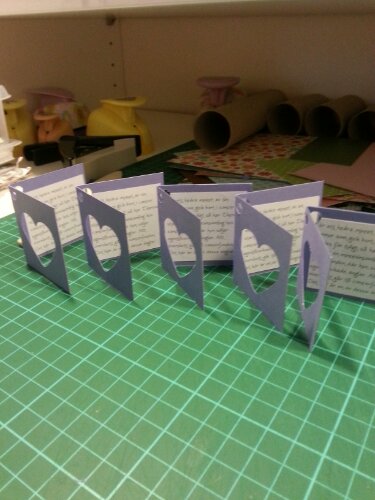 A mid week finished card for once! Just to be able to participate in a few challenges. For this card I had 2 sisters challenge #134: pastels, the crafty bloggers network #9: spring or pastel and a gem of a challenge #70: floral frenzy (I marked those words, he he)  in mind. And a bonus was to use the never ending paper flowers and brads from my stash. One tiny step towards extinction, yay!

I do feel that something is missing in the background but I’ll just leave this as it is, there’s just too much to do both at work and at my spare time this week, that’s life! 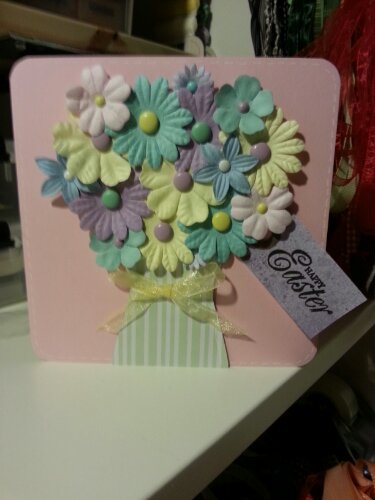 The colors do look slightly darker than they are, me and my crappy photos again! I guess the lightning in my closet is worthless for photos.. Could have figured that one out earlier to be honest! One day I’ll make myself a lightbox or something similar, when I have the time.

This weekend left very little time for crafting and when I had the time I just couldn’t get the inspiration or peace in order to get something done. Forced and slow, that’s how this weekend’s crafting went.

I managed to create one Easter card, it feels like something’s missing, I just can’t figure out what so I’ll just leave it as it is. Inspired by the I love promarker challenge #158: Anything but square I made this egg shaped card.

Maybe a few butterflies would do it, I might take another look before sending it, there’s still time to make improvements! 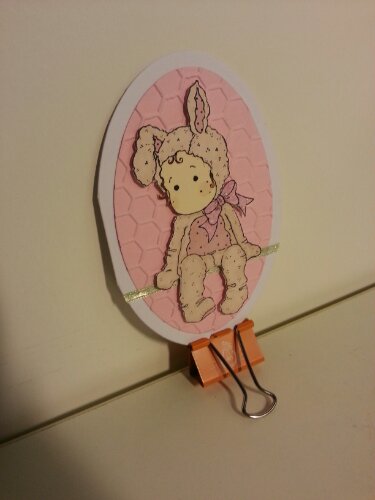 This card was inspired by the Fab Friday Challenge #13.
I do feel more pleased with this one, maybe it’s the familiar shape and bold colors. Or the fact that it’s a small card, a creation fit for this lack of inspiration I’m suffering from at the moment.
Another thing I’m happy about is the fact that I managed to use two of my cardboard decorations I’ve somehow collected over the years. It was one thing I thought I could go for as a goal this weekend (if everything else fails).
When I found these brackets in my forgotten drawer, I thought they were extremely boring, pale and.. cheap. While looking at them I just kept hearing Jennie telling me “you can always emboss or color boring things, I do that with brads sometimes. And use color/mists on boring papers!” I gazed at my color shelf, imagined them all, one by one on my black brackets.. And suddenly my I found it; my black diamond stickles! I looked at the brackets, back to the stickles tube, grabbed it and went nuts. Love it! 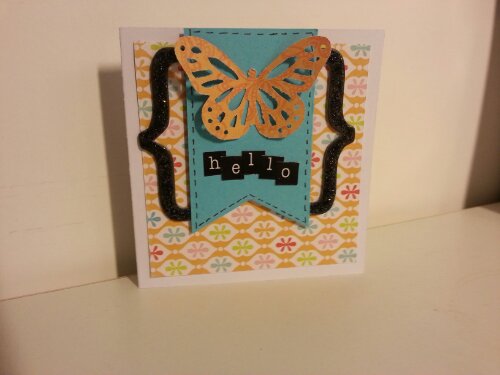 And as usual I manage to take the worst pictures.. I  just have to get that lightning right.

So I spent a few hours in my crafting closet today again with a few challenges in mind.
Here are the results and the challenges: 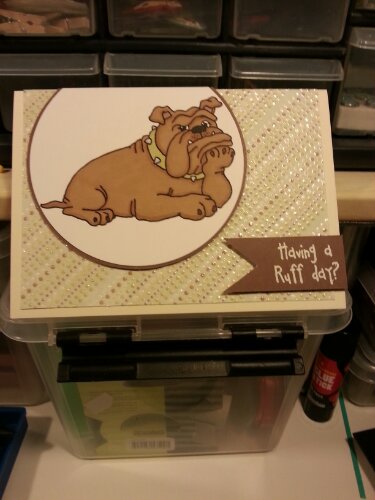 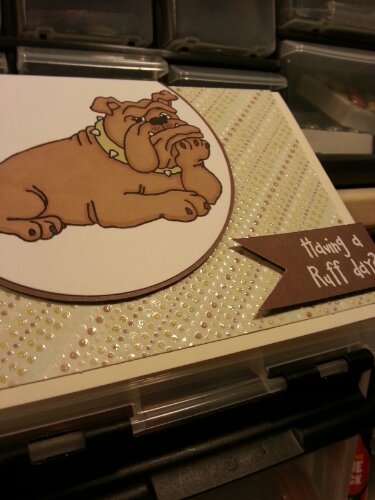 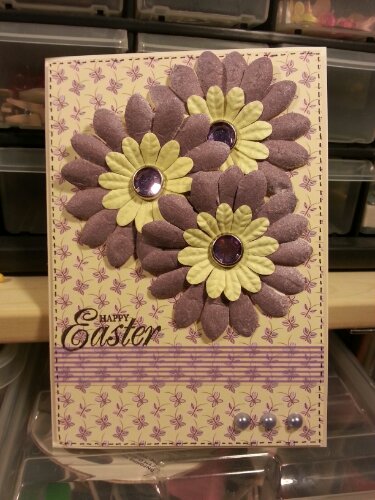 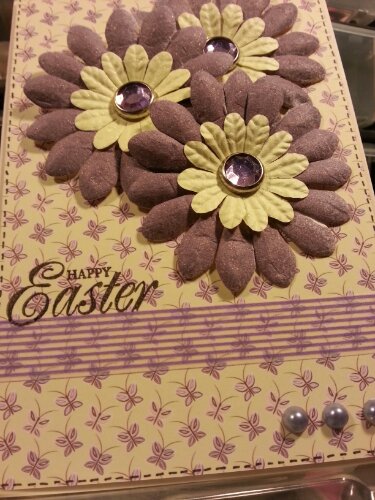 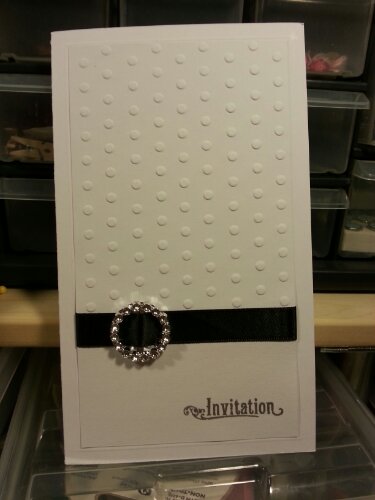 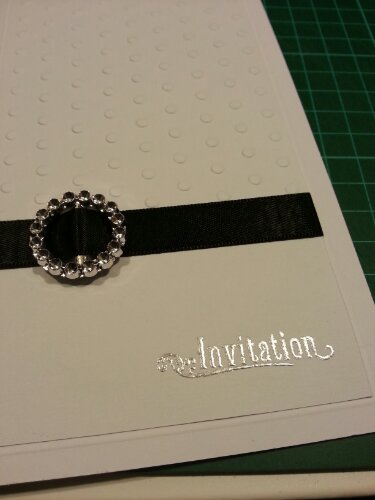 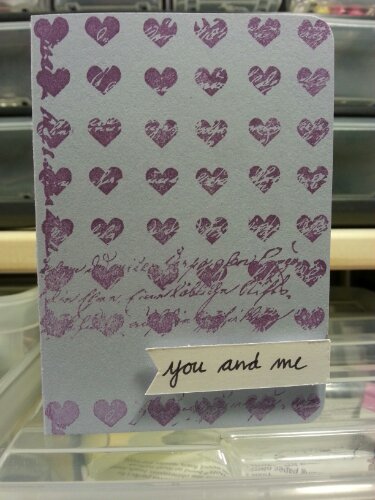