My cousin Leon turned three a few days ago and he wanted a white dress for a princess costume. He was very certain with the looks of the dress, no puffy cupcake-styled dress! It was supposed to be simple with some pearls and a necklace. So I made him a card, found a dress (wish I’ve had time to sew one for him instead) and pimped it a bit. I think he liked the dress but he did look somewhat disappointed when he opened the present. We asked him to put it on with the tiara and all and he did, he’s such a sweet boy! Now I have the perfect picture for his graduation day, he he. Just another 15 years to go!

Here’s the card and the dress: 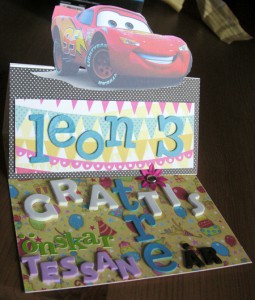 I decided to make an easel card for the Alota Rubber Stamps’ challenge #81 and since the card is for a young boy I decided to enter Going Buggy’s April challenge which was  to make a card for a child, any age, too!
The card was easy to start with, I had to have Lightning McQueen on it since it’s his favorite from Cars! The letters are just a lot with all the colors but it turned out OK and I got an opportunity to use them! 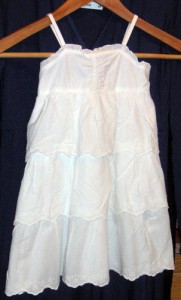 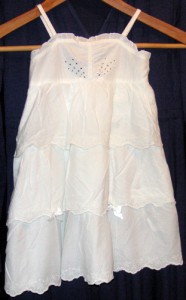